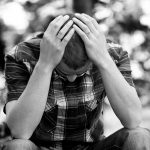 Previous research has indicated that depressed mothers have altered immune function, are at greater risk for psychological disorders and may react to stress in life in a different way.

Recent Findings suggests that fathers who are in tune with their children’s feelings and supportive of their children rather than critical rear children with better social skills and language abilities independent of race, ethnicity, and socioeconomic status.

In addition previous findings have suggested that mental health disorders significantly impacts children’s social and emotional development. most recently research conducted by Parenting Research Center has suggested that one in five dad’s have experience symptoms of anxiety and/or depression since becoming a father. This research consisted of a survey of 2600 parents, 40 of whom were dad’s. The data dound that less confident fathers perceived themselves to be less consistent and more impatient and critical with their child. They also reported engaging in activities with their child less often and were more likely to say they argued. Although it was suggested that the number of fathers reporting symptoms of depression and anxiety were lower than mothers, the fathers surveyed were less likely to identify someone they trusted they could turn to for advice. Many times men do not disclose or seek treatment for illness and especially mental health problems according to The Guardian.